I am very conscious of my continued sporadic posts of late and that my much heralded return has fallen somewhat flat. However, here I am and I thought I'd share my latest distraction with you. 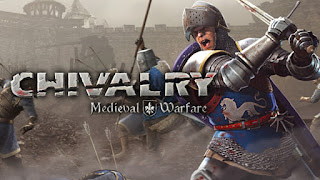 Released originally on the PC some years ago, Chivalry Medieval Warfare is a first person , multiplayer hack-em-up very much in the mould of Monty Python's Holy Grail-meets-Brian Blessed which has made its way onto current-gen consoles and is available for around twelve quid on PlayStation Network. Though somewhat dated in its aesthetics and restricted in its map size, Chivalry soon grabs you by the gizzard and thrusts you into the mud, blood and rain of medieval carnage. 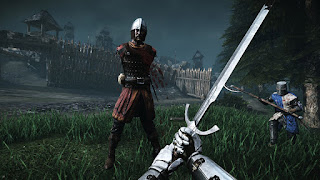 I say carnage advisedly as the game does a sterling job of depicting heads, limbs and armour flying in all directions under a rain of blows from all manner of period weaponry. The controls are fairly intuitive and allow you to wield your weapon in a number of different ways; critical for victory. 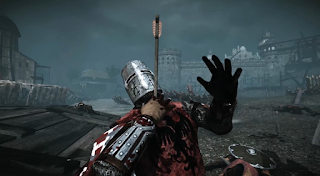 Game play is frantic and adrenaline inducing as damage and stamina is modelled with every swing, thrust or lung of your steel; momentarily depleting your strength,  resulting in a temporary lull in your ability to react, so timing and skill are essential. There is a real sense of achievement when you are victorious over your foe. I recall a particular scrap against a skilled opponent with my character bloodied and reeling; one more blow away from death, only for me to land a lucky(?) blow from my broad sword, removing the chap's leg before I finished him off with an overhead swing - YES!! 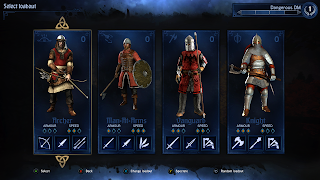 There are a number of game types - the usual death match, team death match and team objective, to name a few, with teams of up to 24 players per side. You choose from four classes of warrior and have the option to customise appearance and weapon load outs, with more being unlocked as you rank up.

To sum up, a  thrilling distraction that raises laughs, shouts and swearing, probably for all the wrong reasons. Buy it and I look forward to meeting you on the field of battle!

That's it for now,

Indecisive, fickle and often unfocussed casual war gamer and sometime film extra. Interested in military history, science-fiction and gaming on PCs, consoles, table tops and boards...when I get the chance.